Yesterday, we started what I hope will become an annual tradition - we rode bikes down to the Tidal Basin to see the cherry blossoms and have a picnic. The mostly downhill ride is about 6.2 miles long - by far Connor's longest bike ride. He was tired by the time we stopped for breakfast, but he didn't complain at all, which made the ride pretty fun (although it was on the chilly side, to be sure).

Ed rode lead with Helen on the trailer bike, followed by Connor, and me taking the rear. I wish I were a talented enough rider to snap photos and ride at the same time, because I could share a photo of Helen waving to onlookers as if she was in a parade. Maybe next year, she'll help more with the pedaling! 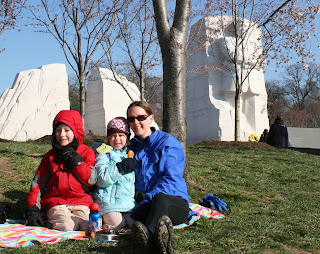 The blossoms are a few weeks late at this point, but we did catch some in bloom. We also had the benefit of several roads being closed for the Cherry Blossom 10 Miler, which made crossing streets a lot easier than it otherwise would have been. 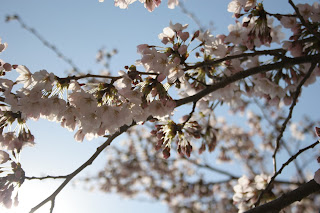 Email ThisBlogThis!Share to TwitterShare to FacebookShare to Pinterest
Labels: blah, Fun Stuff in DC with Kids