I’ve been thinking a lot about what I should tell you on your first birthday. It seems like such a momentous occasion, and yet, it’s not all that different of a day to you. Mims, Pappy, Aunt Linda, Uncle Bill, Anna, and Emily have come to visit. And when the big day arrived, we set up the splash pool, threw on swimsuits, and had a PAR-TAY, complete with a cake that looked like a shaggy dog and ice cream served up by your Pappy. You were not terribly impressed with the ice cream, but you did enjoy about a Tablespoon the next day when we went to Coldstone Creamery before hitting the pool at the Holiday Inn – which your cousin Emily says is the nicest place to stay. 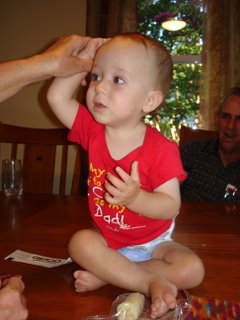 For a while, I thought I would stop this online journal once you turned a year old, but then I realized I wouldn’t have a public outlet to mock your father anymore, and that made me a little sad. Actually, it’s your fault that I’m keeping the blog open. You keep insisting on changing each month and doing more and more amazing things that simply must be recorded. Plus, if I killed the blog now, the folks who check in on you regularly might not get any sleep wondering if you had gotten your top teeth yet, had your first taste of ice cream, or gotten drunk and passed out on the driveway. (Who says I have no idea what’s coming in the future?) 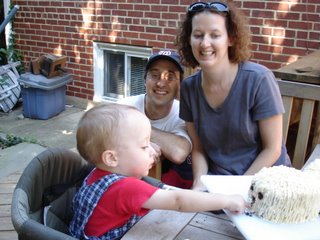 I decided to give you the brief version of how you came into this world, just in case I’m ever hit by a car and forget. Or, more likely, you successfully head butt me into submission and I’m left lying on the ground completely dazed! All I can say about that is – what a way to wake up on vacation. You nailed your daddy last week!

On Thursday, August 11, 2005, I went to my regularly scheduled appointment with my midwives. As tended to happen often, Marsha was the midwife your dad and I saw. We joked with her about being ready for you to come, we asked her how big she thought you were, and other random questions. She told us that there have been studies done and the mom is actually the best predictor of how big the baby is. And, that would prove to be true as I guessed your weight to the ounce less than 17 hours later. There were no particular signs that you were about to make your entry into the world, and in fact, I had planned my workload very carefully so that I would finish a project before you arrived – which I assumed would be one week later than your due date, putting your arrival at August 26. After all, what kid of mine would be early, much less a WEEK early? I went to bed around 11:00 as was usual at that time, and at 1:00 I woke up. Apparently we were in the midst of a meteor shower and I, along with three other Birthcare clients went into labor. Who knows if the two are related?

Anyway, your dad woke up, wondering what I was doing, and I explained to him that I had either just peed all over myself (something that was a distinct possibility at this point in my pregnancy) or my water had broken. Thankfully for my dignity, it was the latter. I started having contractions that were short, and not all that painful. We called the midwife and she gave us suggestions on how to slow the contractions down, noting that they were too fast and likely not all that productive. True to form, your father asked if it was all right if he went back to sleep and I labored out in the living room so as not to disturb him too much. We were, after all, preparing for the fact that it often takes about 24 hours from start to finish.

We checked in with the midwife a couple of times, and by 7:00 I had decided that you were coming soon as the contractions had become noticeably more painful and further apart – about every five minutes. It was time to call in the professionals. My scheduled birth assistant was on vacation and her back-up had a client go into labor. This all turned out to be fine as Erin showed up around 8:00 and was able to get another super fabulous birth assistant to my house by 9:00. Prior to calling the birth assistant, Erin started an IV with antibiotics (I could still move around freely), and your dad showed an amazing sense of grace by nearly ripping the thing out of my arm. Nice move. Really…I’m just in LABOR here! At 11:00 I felt the urge to push and before noon, you were in my arms, gazing at me from my belly. I announced “he’s perfect” before seeing that you were a boy and before you bothered to take your first breath. The other three folks in the room looked on waiting to hear your first beautiful cry. Your dad was fabulous, keeping me very well hydrated throughout the labor. Seriously, Connor, I drank like 2 gallons of Gatorade, if not more. The fluids alone are a reason to stay at home to have a baby. You came on an even numbered day, and as you might as well know, your dad and I have a penchant for making decisions based on games of chance. We had decided that if you came on an even numbered day, you would have his last name and if you came on an odd numbered day, you would have my last name. When filling out the birth certificate, your dad offered to not honor the deal and give you my last name (I had just given birth with no pain killers!), but I foolishly agreed to honor our original bet.

Within a couple of months of your birth, I was overhead saying that labor really wasn’t all that bad, which just goes to show how delirious from sleep deprivation I must have been. And that, my friend, is how you came into this world. I wouldn’t change a thing, except maybe I would make your dad feel guilty for sleeping while I labored through the night. But there’s always time for that later. Like when he’s reading this post and thinking about how everyone else reading this post will wonder what the heck he was thinking asking to get sleep while I prepared for the birth of his child! They will also note that I must be the kindest person in the world to have granted the request. 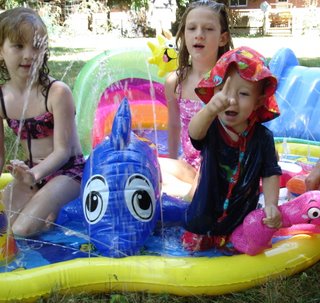 Now the news on the homefront. This month, you discovered the art of clapping for yourself, clapping for neighborhood dogs, and clapping at the Nationals game when others around you clap. You also perfected the art of standing up – unassisted – while at the same time drinking from your sippy cup, or clapping, or generally looking confused about how you ended up on two feet instead of on all fours. You’ve lost plate privileges (something that happened after you dumped your plate on the floor for like the millionth time and then looked longingly at the contents on the floor, and then showed me how you could look THROUGH your semi-transparent plates at the ceiling fan above the dining room table – a trick your father taught you).

Lately, you’ve been concentrating a bit on this whole talking thing, developing a LALALALA that can be sung out loud and a TATATA that is so amazing it has to be whispered. You have also added a “p” sound and most possibly a “k” sound – though this last one happened so fast it wasn’t clear if Daddy heard you correctly. Most things are still announced with a firm “DAH!”, but you know it makes me smile when you string together a nice series of MAMAMAMAMA. However, I’m not so happy about the NANANANANA that you learned from your 3 year old cousin that you’re happy to use in context. It’s sort of annoying.

You have also become expert at pushing a toy shopping cart at Lydia’s house, cooking blocks in the toy kitchen, and cruising around in your very own red slug bug – a gift from your Aunt Heather and Uncle Rick who saw how much you enjoyed Katie’s pink version at the beach. We play a game called “crash” where whomever is pushing you nearly runs over another person, who hops out of the way and makes a funny sound. You laugh, Connor, how you laugh. This game, like many others that inspire you to laugh from your belly was invented by your dad. 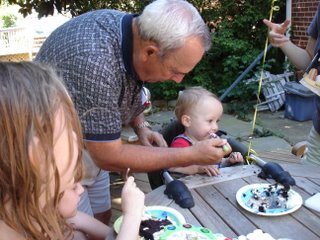 I’ve weaned myself from the breast pump so I am no longer pumping milk, but you are still nursing every chance you get. However, it's about time an actual cow loaded with articial hormones takes over this job. My body is tired. I’m hoping you lose interest in the next couple of months – which might just show what an optimist I am. If not, we may be one of those pairs of people at the park where the four year old kid walks up to his mama and demands to nurse and she complies as the kid lifts her shirt, takes a nip, and goes back to playing. This would horrify your Aunt L. But she’s from Kansas, and lots of things horrify her. You will learn this if your dad and I die before you turn 18 and she becomes your new mama. All I can say is, give her hell.

And Connor, all of these things are so amazing, I can hardly believe I’m part of them sometimes. Seeing the world through your eyes creates such joy, it makes me sometimes forget about how hard this year has been at times - but I will try and remind you about how hard it was when you are older but too young to contemplate bringing grandchildren of mine into this world, and I might just make stuff up if I have to. Who says your mama can't tell a good story?